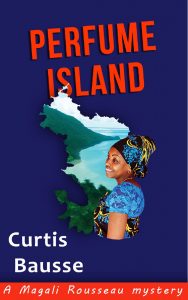 Well, Curtis Bausse’s amateur sleuth Magali Rousseau has stumbled across trouble again in his new book Perfume Island. She’s currently vacationing with her friend Charlotte on the beautiful tropical island of Mayotte in the Indian Ocean. One day Magali makes the mistake of speaking with Charlotte by cell phone while Charlotte is driving back from the market (a definite no-no no matter where you are!).  There’s the sound of a crash and Charlotte’s phone goes dead.  Soon Magali learns that while navigating a curve in the road Charlotte apparently hit, and killed, a young woman.  The local police and just about the entire population of the island assume Charlotte is at fault, but looking over the scene Magali begins to have doubts…. And so starts a new Magali Rousseau mystery.  At first, the local officials go along with Magali, assuming they are humoring her in a pointless quest to help her obviously guilty friend.  Then what is clearly a murder occurs, this time of a local developer who was flirting with Magali.  Now Magali faces two tasks: she must help the local police investigate the murder, while also struggling to get their help and keep attention on Charlotte’s case.

Bausse does an excellent job coloring in all the inherent conflicts of what should be a tropical paradise. The island is currently a backwater plagued 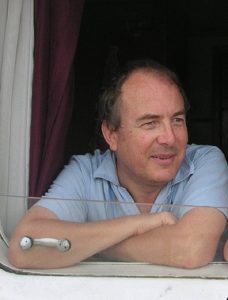 by unemployment, shanty towns filled with illegal immigrants who are mainly Muslim, and the conflicts that result with native islanders and wealthy Europeans tourists and developers.  Using this background he constructs a story filled with possible clues that will keep you guessing.  Are the two events – the dead pedestrian and the murder – connected?   What, exactly, was the developer up too?  Can the local police be trusted?  Can anyone be trusted? As Magali struggles to find her way through a maze of “facts” to the ultimate answer, you will too. Bausse is a master at setting traps for the reader to fall into, so that just when you’re sure you know the answer up pops a new clue to send you off, scratching your head, in a totally new direction.

Perfume Island is all in all a fun read with an ending that is totally satisfying and logical – even if you never see it coming. I highly recommend it to mystery buffs and anyone who enjoys a good read.

Find it on Amazon.