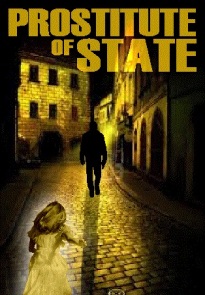 [NOTE: Prostitute of the State by Kate Kinnear is a free read posted on Bookkus.com.  It has not yet been accepted for publication. So it’s not been editorially reviewed, and you will come across the occasional typo or rare sentence that needs work, but it struck me as such an overall excellent, well written story that I just had to review it.  I urge you to read it and post a short review and help move this book toward publication (that’s the way Bookkus works).  You can find it at http://www.bookkus.com/review-a-book/prostitute-of-state/.  You will need to sign-up as a reviewer, but that only takes a few minutes (if you have any problems, please let me know. -DocTom]

Prostitute of the State by Kate Kinnear is a highly enjoyable read.

Mixing a small town, prodigal returns, story with one of cold war espionage doesn’t sound like a natural, but Ms. Kinnear pulls it off with gusto.  It’s the story of Jack Paradies, former high school hell raiser and dysfunctional son, who returns to the small town of Sighclone, Nebraska after being away for years.   The town hasn’t changed much, except for maybe being a bit drabber, and the locals’ (both acquaintances and family) only apparent achievement is to have gotten older.  There is little there for Jack until he meets Jade Ratigan and her daughter Lucy. Jade owns a tavern – nothing fancy, if you’ve ever been in a ‘Dew Drop Inn’ in the middle of nowhere you’ve been to Jade’s place. Jack and Jade are quickly attracted to each other, and with the help of the precocious (and needy) Lucy soon develop a relationship.  Despite his bad boy legacy and dysfunctional family upbringing, Jack is quickly drawn to the Ratigans, and since Jade has a “thing for outlaws” the attraction is mutual.  The first part of the book takes us through their growing relationship, but also tells us a lot about the town (as seen through Jack’s eyes).

We also get the sense that something dark in Jack’s past haunts him.  Where was he all those years? Why did he return to Sighclone? You quickly feel that Jack is looking for something. That he needs something – he drinks too much, smokes too much, and maybe plays with the 9mm. he keeps in his truck a little too much. Does Sighclone meet his needs? It’s where he was born and grew up, and even though that’s the flimsiest psychological definition of ‘home’, it’s all he’s got until he meets Jade.

Despite his bad boy image, Jack is the type who helps people. It’s a big part of who he is. When he discovers Jade is an aspiring author who gets praise for her writing ability, but not her stories, he decides to help her.  Working to overcome his pain bit by bit, Jack tells her his story so she can turn it into a novel.  Kinnear masterfully intertwines the continuing story of Jack, Jade and Lucy’s growth into a family with Jack’s story of espionage, murder, paranoia and ultimate loss in service to his country.

Kinnear writes with authority, ranging from the rapid fire, staccato descriptive style she employs while describing small town folks trapped in an unhappy life, to Jack’s matter-of-fact description of 1950s European scenery and events. She has a unique ability to draw her characters and scenes so they are totally believable – whether it’s a rundown bar in a withering town of a flyover state, a bucolic scene in Amsterdam, or a guarded railroad warehouse in Hamburg. I especially enjoyed the interaction of Jack, Jade and Lucy – real, coarse, with no pretense of sophistication, just real people trying to find happiness while living day to day.  She also conveys a lot of information about her characters and their psychology through their actions and words – the mark of a good writer.

In the end, Prostitute of the State, tells us that while it may be true that “you can’t go home again,” there’s always the possibility that simple human kindness and love can lead to a new beginning, family, and, ultimately, a new home.

So go to http://www.bookkus.com/review-a-book/prostitute-of-state/.  Read the book, review it and help it get published. You won’t be disappointed.

Coming soon – an interview with the author: Kate Kinnear!